I designed the 3D printed parts in a way so that you can wind the dipole Wires and the Coax Wire on the middle Piece.

You also will need 8 Isolators. 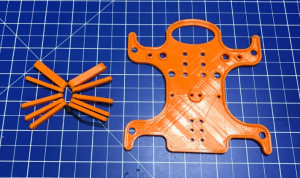 The Settings of the 3D Prints are not that important.

I have printed my Parts with 20% Infill and it worked fine.

Our Linked Dipole will have a 1:1 Balun.

I have bought the Toroid and the 13m Coax cable with the attatched connector from SOTABEAMS.

I have used the following Parts: 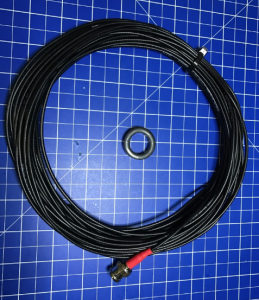 On the SOTABEAMS site where you can buy the Toroid there is a really nice “Manual” where it shows how to wind the 1:1 Balun. 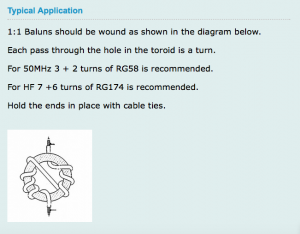 In our case when we will make a Balun for HF we have to make 7 turns on one Site and then 6 turns on the oposite side as shown on the Picture.

Always remember when you wind a Balun or a Transformer a “Turn” is then the cable goes throu the Toroid.

I measured about 50cm from the Coax cable and put it throu the toroid. I fixed the first turn with a small ziptie. 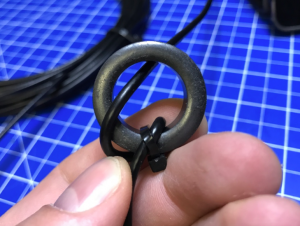 Then you can wind the Balun as shown on the Picture from SOTABEAMS but with the 7 + 6 Turns.

When you are finished winding the coax you can put the a second ziptie on the outcoming Coax Cable.

Now mount the Balun on the 3D-Printed Centerpiece with 2 Zipties and use another 3 Zipties as a strainrelief for the remaining Coaxcable that goes to the Radio. 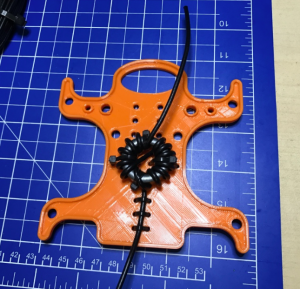 That is the first Part on our way to the Linked Dipole.

So the Balun is on the Centerpiece, Now we want to connect the Balun to the Dipole Side.

Cut the outerside of the Coax Cable from the Cable like shown on the Picture. Note that you should not cut too wide in the Wire.

When you are finished it should look like on the picture. 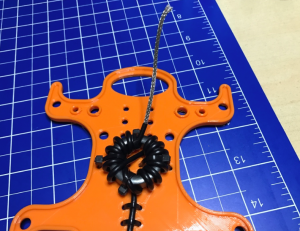 Now use a needle or a small screwdriver to open the outer Conductur of the Coax wire. You do want to take your time on this step. Be carefull so you dont break the outer conductor. 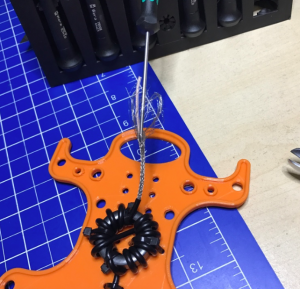 When you are finished wind the outer conductor around and make it nice ant tight.

Cut it about the same lengh as the inner conductor. 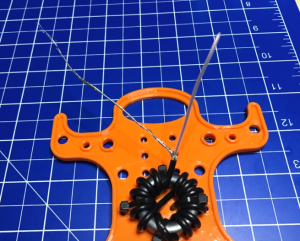 Put some heatshrink on the outer Conductor and on the point where the 2 Conductors meet on the Coax cable. 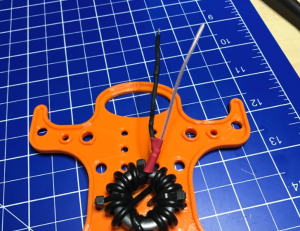 Get yourself 2 6mm Cable connectors and solder them on the ends of the 2 Wires. 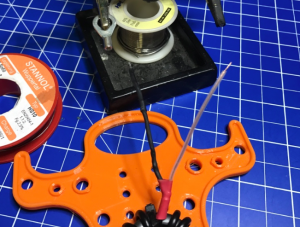 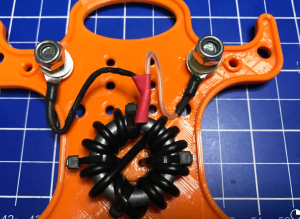 This is the first time that i Calculate an Antenna so i have looked the formula up in an Antennabook that i have. 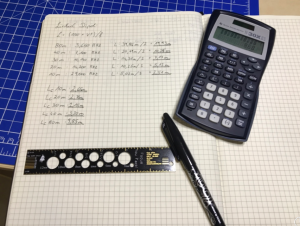 I have put some extra Lengh on the different wires so we can trim them later when we measure the SWR of the Antenna.

The Lenghs from the different Bands are:

Please note that the Lenghs are per side so we need 2 of all Lenghs.

So we have all the parts and the wires cut to a lengh where we have a little spare lengh.

Solder on the cables for the 10m Band a Ring and secure it with the nut where the cables from the Balun are mounted.

Put the wire throu the upper hole and make a secure knot. Make sure you have a little spare wire so there is no force on the ring on the screw.

Put a knot on the wire like on the picture. 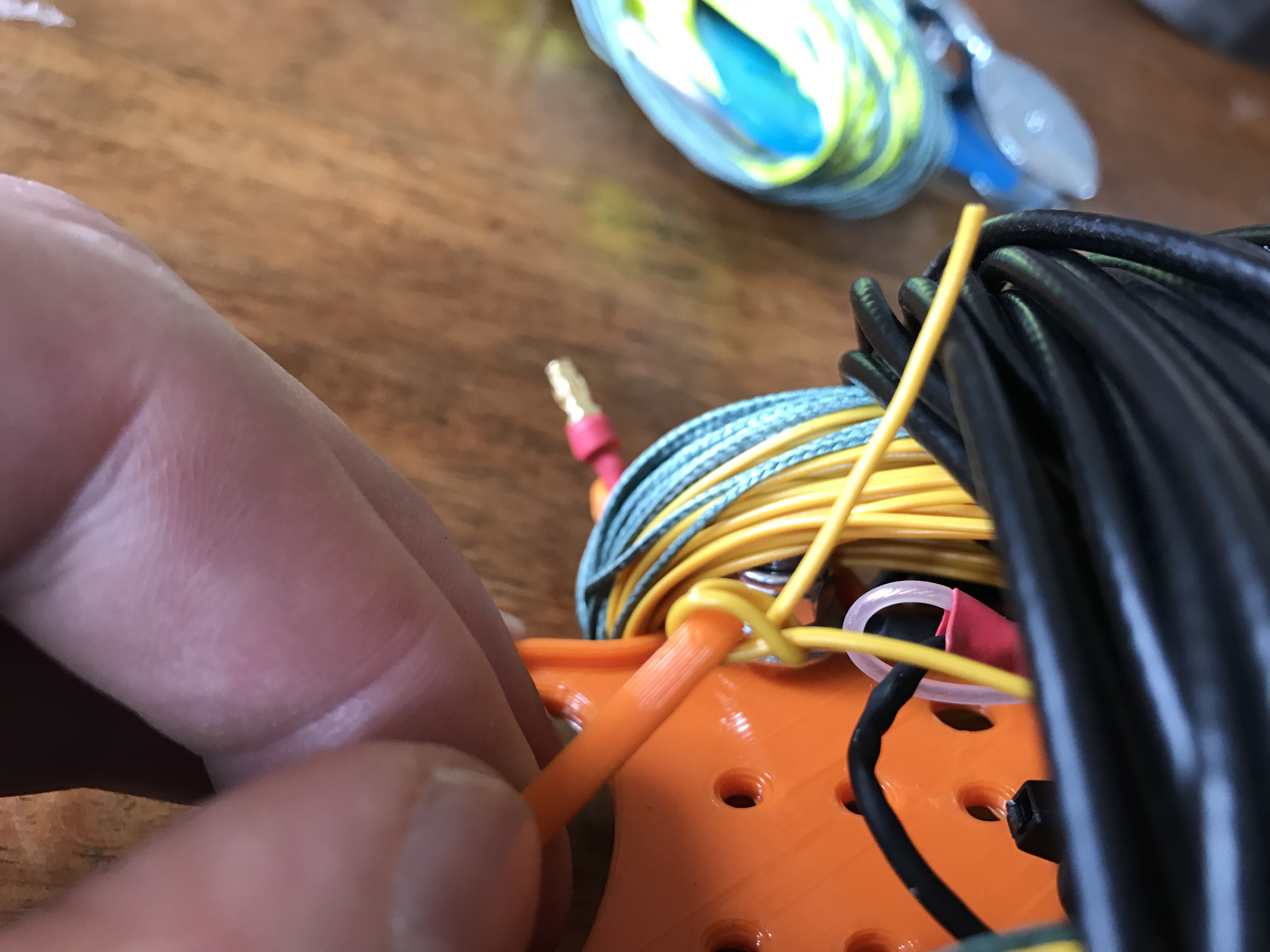 Now, on the other side of the isolator put the wire from the 20m Band. Go on for every wire from every band until you reached the wire for the 80m Band.

On the last isolator put about 4m of some kind of string. I have chose some thick fishing wire. On the other side of the string put a loop for fixing it later.

We are almost done. Now on the last step we have to measure the SWR and cut the antenna to the right lengh.

We will have to put the antenna to some height. I have choosen a 10m fiberglass mast and an Umbrella stand. 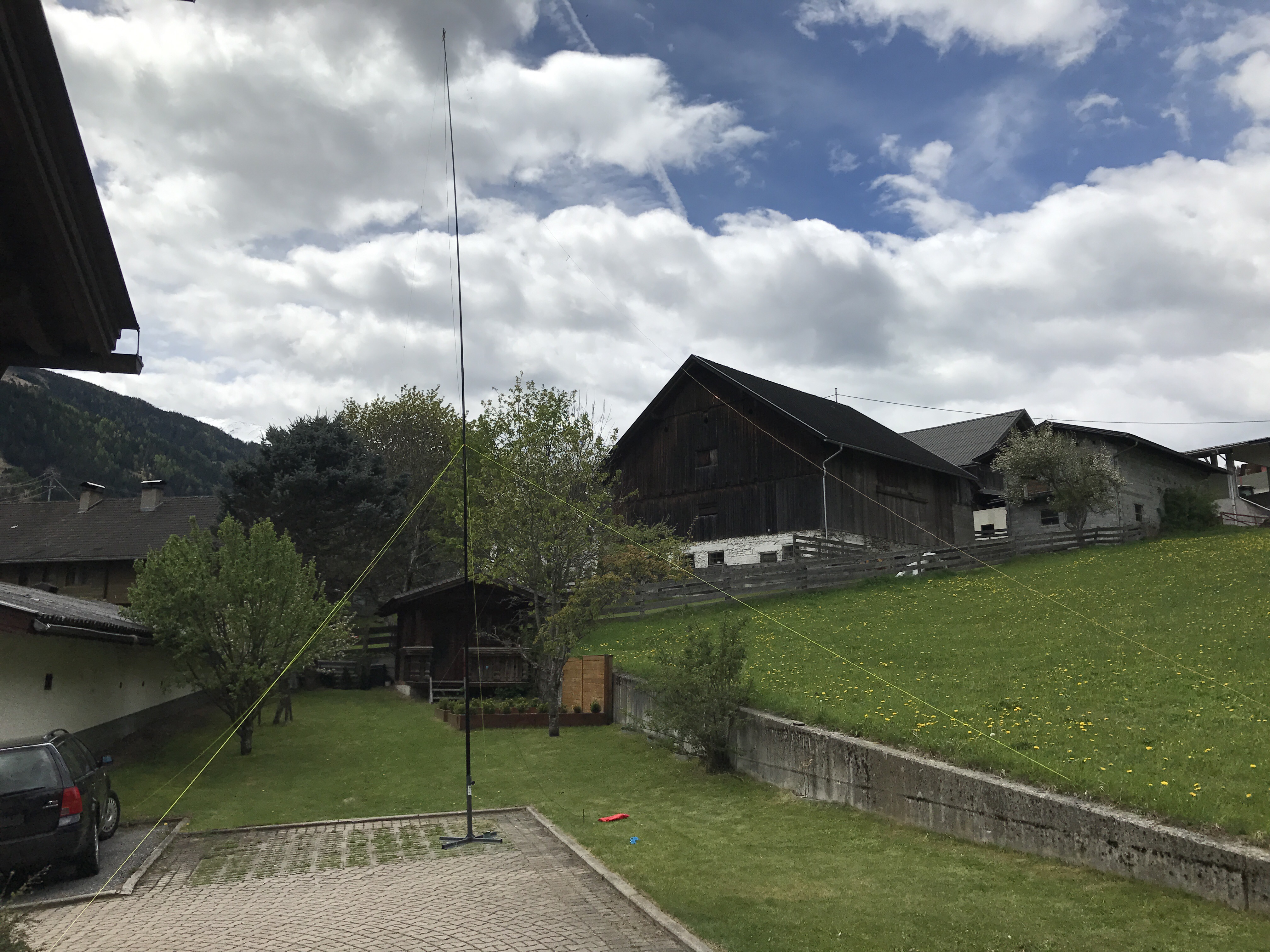 Get your SWR analyser or a radio with a SWR Meter and set it to the 10m band. I have choosen a center frequency of 29mhz.

Now if the antenna is too long let the centerpiece down and cut the same lengh of wire away on both sides. I have began with about 4cm. Just loose the knot a little, make the antenna shorter and tighten the knot again a little.

Not put the antenna up again and measure again.

When the first band is ok let the antenna down again. Unisolate both wires on the first isolator and connect them by twisting them together. 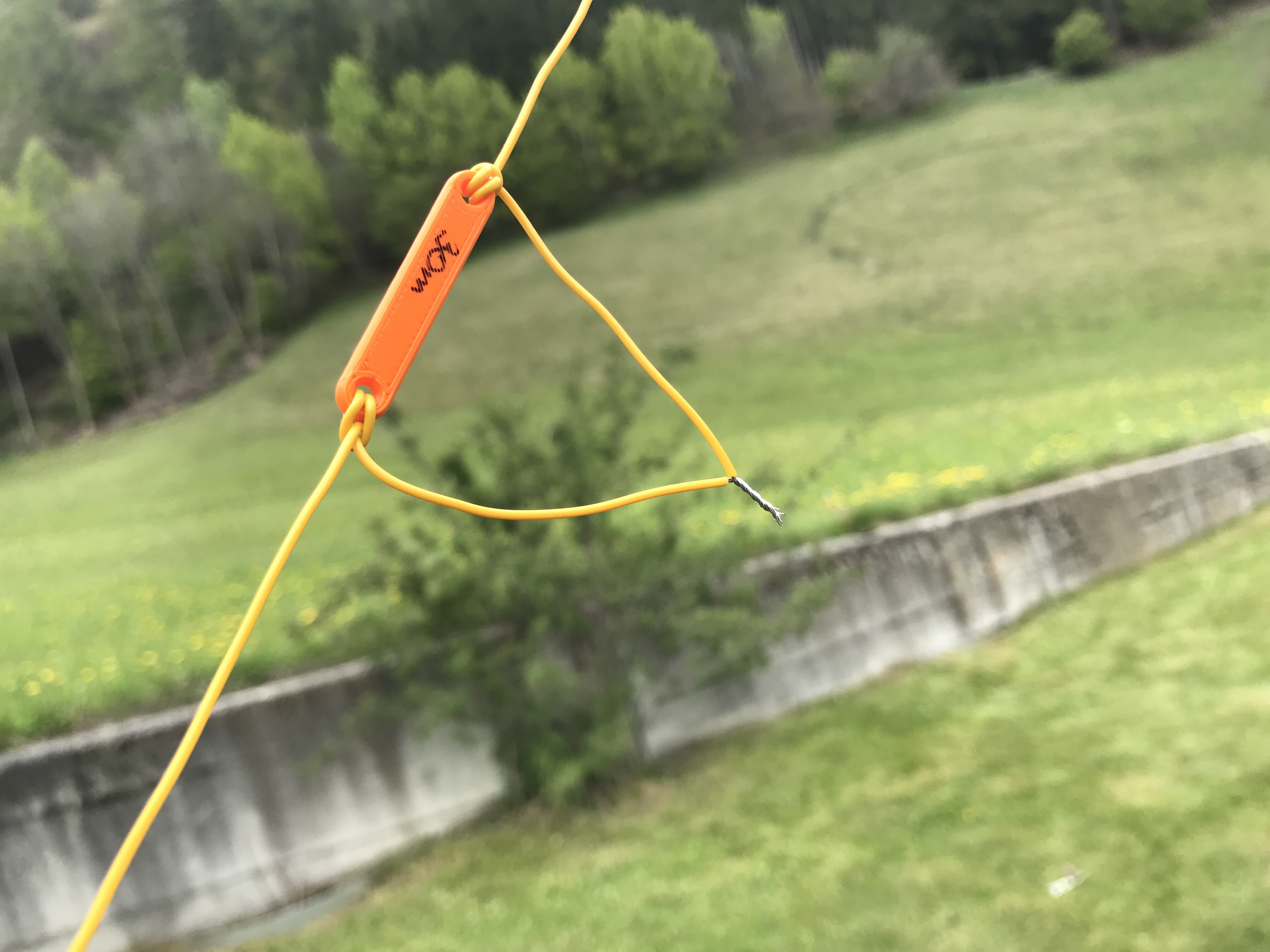 Now put the antenna up again. Set your analyser for the 20m band (in my case i choose a frequency of 14.200mhz).

Now again measure the SWR and shorten the wire for a good SWR.

Do this for every band until you have a good SWR on the 80m band.

We are almost done. It took me about 2 hours but it was my first try and i fckd up one time by closing the connection on one band and a different on the other side. 🙂

When you are done solder your connectors on the unisolated wires. I have choosen some small banana plugs but you can also use some crocodile clips or something similar. 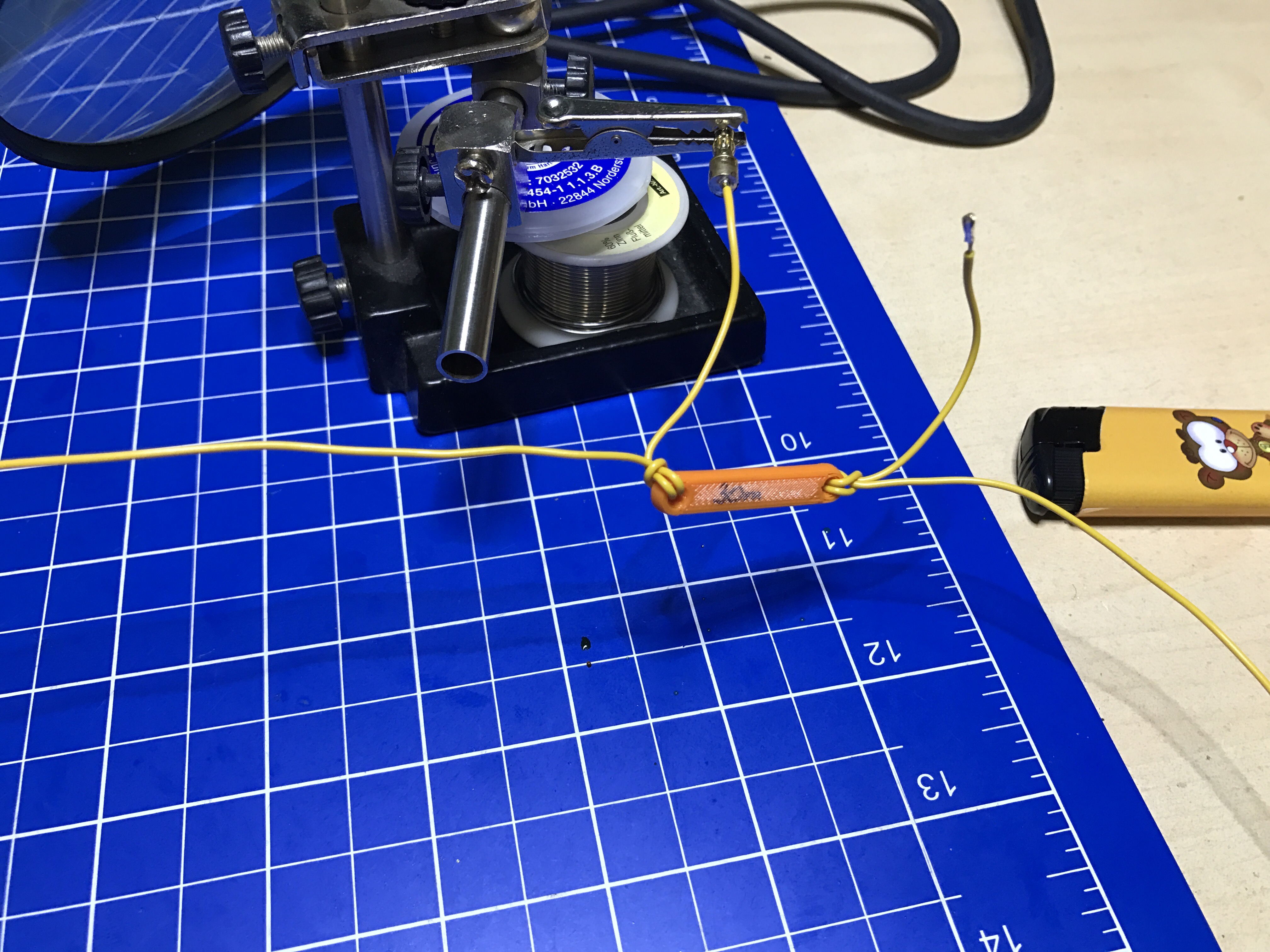 Now we are done. 🙂
Wind the wires on the centerpiece and wait for some good weather to try your new antenna in the nature. 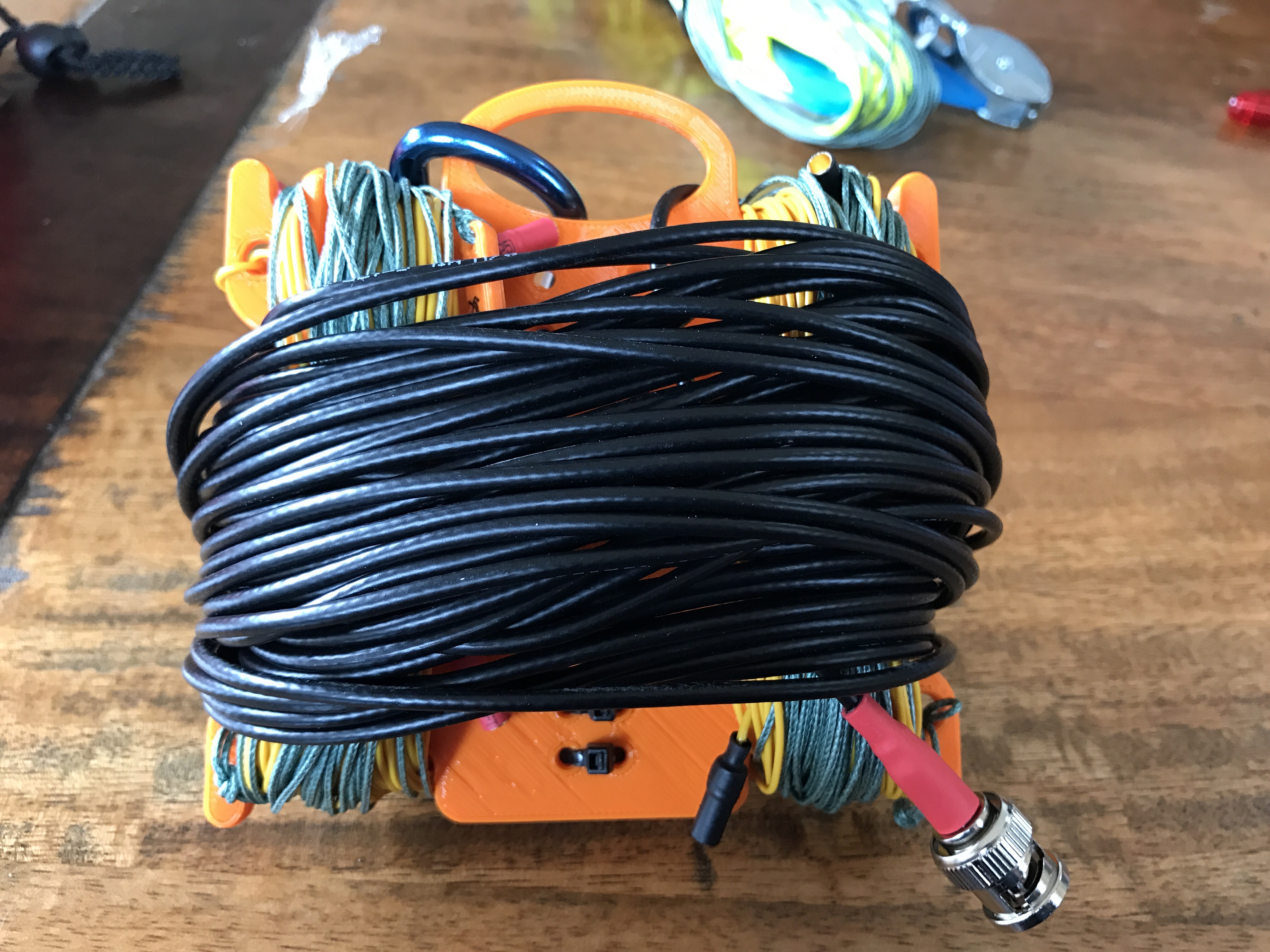